There’s something about tunnels that inspires wonder in the inner child or engineer in us. The historic narrow tunnel carved through the granite Dalmorton Bluff on the Old Grafton Road (also known as the Old Glen Innes Road) was our primary reason for riding this loop between the Clarence valley and the tablelands, but there is a lot more to enjoy.

A few miles out of Grafton ,the road crosses the Orara River on a heritage 1874 bridge. The bridge is one of the oldest lattice truss design bridges in NSW.

The bridge has three wrought iron piers with an interesting cylindrical design, wooden deck planking and wooden truss approaches. The ironwork was imported from Britain and the bridge was considered a miracle of engineering – as indeed it is having withstood nearly 150 years of Orara floods! The bridge is 122m long and single lane, but traffic is light – we walked across and enjoyed the view of the Orara gorge cliffs. It was named after the parliamentary member Mr Thomas Bawden, and allowed heavy machinery to be transported to the gold mines at Baccarumbi and Dalmorton.

There is a space to pull over on the Glen Innes side of the bridge and have a closer look.

Built around 1867, the old Grafton Glen Innes road was a Cobb and Co stage run. It was also used for transporting wool for the highlands to the wharves on the Clarence River. Later it serviced the goldfields and sawmills.

From Grafton, the road is sealed as far as Buccarumbi, where a low concrete bridge crosses the Nymboida. A high iron bridge similar to Bawden Bridge once stood here, but did not survive a flood – see of you can spot the pylons. The Old Grafton road is gravel from here, and follows the Boyd riveri.

Goldfields and the Dalmorton tunnel

Gold was discovered in the Dalmorton area in the late 1860s, and led to the establishment of Buccarumbi, Dalmorton and Newton Boyd – all towns on the Boyd River that this ride passes through, although not much remains. At the peak of the gold rush, some 3000 people lived in this area. The timber industry out-lasted gold, with steam driven sawmills operating in the valley into the twentieth century. Make a stop of the information signs on the roadside, with more across the river at Dalmorton campground. A good place to stretch your legs while you read the stories.

The Dalmorton tunnel is on the road not long after leaving Dalmorton township. The tunnel was blasted and hand cut into a granite bluff on the riverbank in 1866 By civilian labourers. The 20m tunnel was hand cut (not by convicts) in 1870, and often contains a nice puddle to splash through. If you stop for a photo, look up at the graffiti on the tunnel roof.

This is all Gumbaynggirr country, from the Clarence to the Nambucca and inland. The Guymbaynggirr have camped and hunted in this valley for 6500 years or more.

Leaving the Boyd valley, the road crosses over a ridge. Its a pleasant ride through forest and farmland. Along the way you will pass the World War 1 soldiers memorial at Newton Boyd, near the Henry River bridge.

The Mann River and the curious drainage pattern of the Clarence

The Mann River is a major tributary of the Clarence, and like the Nymboida and Orara, it flows north, while the Clarence flows south. Others have wondered about the complex drainage of the Clarence catchment, is it possible that the Clarence is flowing backwards? It is an intriguing but controversial theory but the geological evidence may not support it. Rock doctor and artist John Jackson exploits the patterns and shapes of the Clarence valley to make some colourful artwork.

But back to the ride. Lookout for the turnoff to Tommys Rock Lookout just before the Mann River crossing, if you have time for a detour. The steep climb rewards you have a stunning view, tales of a bushranger, and maybe some rock wallabies. There are nice picnic facilities at the Mann River campground.

Across the Mann River is Diehard creek, which reminded me of Diehappy in the Bellingen valley. Time to concentrate on staying alive now, as the narrow road climbs 800m from the Mann River valley to the Gwydir Highway in the next 45km, with lots of twisty corners. Fortunately, much of it is now sealed.

Meeting up with the fast Gwydir Highway, we turned east and then took the turn off to Raspberry Lookout for a picnic lunch and rest break. The Gwydir Highway takes a more northerly route between Glen Innes and Grafton and replaced the Old Grafton Road in 1960.

Continuing, the Gwydir Highway twists and turns through forest to drop 1000m from its peak into the Clarence Valley over a short 20km – quite a ride!

We took the leisurely route back to Coffs through the Orara River valley. Before Glenreagh, the road crosses the Orara on Bluff Bridge which often closes the road in major flooding. Bluff Bridge now has its own webcam.

If you enjoy heritage, consider a stop at Grafton to stretch your legs and walk the short and easy Grafton Bridges Loop. Or explore the upper Clarence River bridges and crossings – these old routes to the tablelands were used before this Grafton-Glen Innes route was built.

Ferry crossings on the Clarence River 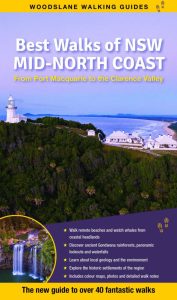